Lots of fun and eating

School has been fun for me. There are still lessons taught, particularly for English and Science. However, we have been busy with our Speech Day dance and it has been fun. I love dancing.

We have been having lots of parties recently. Two of my friends had their birthday parties last week, and another had her birthday party in school yesterday. We had yummy ice cream cakes. Today was Children's Day and the school provided us with KFC chickens and ice cream. Tomorrow will be our class party and I made chocolate truffles for my class. It was really simple to make. You can check out this website http://www.bestrecipes.com.au/recipe/easy-chocolate-and-condensed-milk-truffles-L4891.html for the recipe. Instead of Marie biscuits, we used Ritz biscuits.

I am looking forward for the days to come. More fun in school. Field trip is just round the corner and finally.....our Speech Day.

Hooray! School holidays are coming.
Posted by Ben and Shaun at 2:52 PM 1 comment: Links to this post

We had a mini concert at Yamaha Claris to celebrate the end of our JXC programme. It was combined with another class of a higher grade. There were few electone students who were invited to perform as well.

I had a great time there. I played The Entertainer on the electone and an ensemble entitled Comical Train. My teacher was also so generous to give us angpow for the good results our group had received.

My TiTi also had a mini concert two days before mine, but unfortunately there were no group photos taken. So, here he is in this group picture, as many in this group also had siblings performing in his concert. 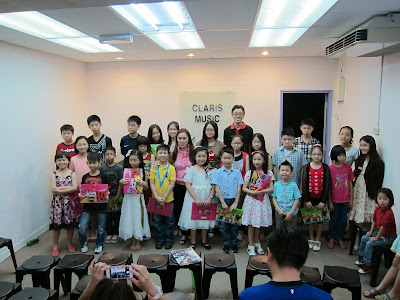 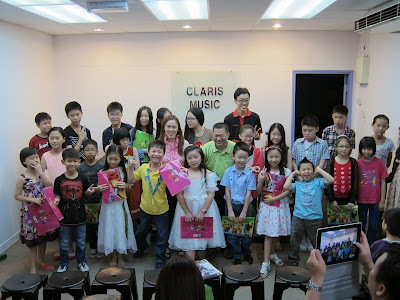 Posted by Ben and Shaun at 7:44 AM No comments: Links to this post

I was so glad when I heard that our church organized a percussion lesson for us to learn how to play the cajon. We have two cajons at home. One for me and another for Shaun Shaun. I have been actively playing on it on my own.

Last Sunday was the first lesson and I thoroughly enjoyed the lesson. I hope to be able to play the cajon one day during church worship session. It would be so fun and cool. 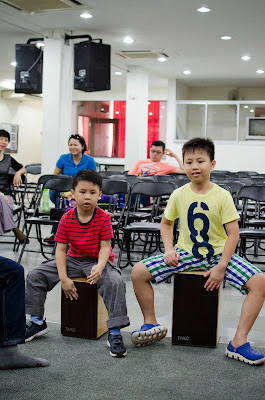 Posted by Ben and Shaun at 8:37 AM No comments: Links to this post

Ben and Shaun
We are two brothers; Benjamin and Shaun, born in the years 2005 and 2008 respectively. We stay in Cheras and our lives and activities revolved mainly around Cheras.